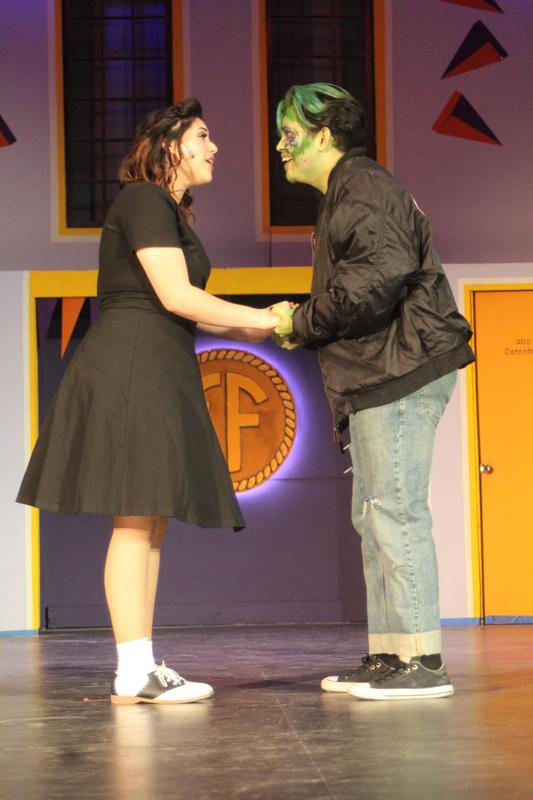 An impressive showing of teachers, students, and family surfaced last weekend to enjoy this ‘girl meets ghoul’ love story. The story unfolds at Enrico Fermi High School near an unstable nuclear plant--you can guess from there what puts the zombie in prom--to create an imaginative and entertaining performance. In speaking to cast and audience members, we heard nothing but positive feedback about the performance and all the details that went into pulling together such a successful production. “One thing that’s different from past years is we substituted the fall play with a musical instead. So we were working within the same time frame to get the show done, and it required a lot of teamwork and discipline on the part of the cast and crew," explained drama teacher Ms. Downie.

We asked lead actor, Nathan Armendariz, about his experience compared to past musicals or plays he’s participated in. He answered, "The one thing I noticed that stood out were the relationships between everyone on stage. Everyone really knew each other, and it was really easy to connect.”  Nathan explained, “Doing Zombie prom was a totally new experience for me, because I played a role that I don’t usually play and I improved a lot.” Another cast member, Stephanie Olachea, commented, “I connected with people, it was fun, and
I made lots of friends.” Fellow cast member Eric Hernandez added,  “It was a fun experience and I got closer with most of the cast members.”

If you missed out on the chance of being in Zombie Prom, well you’re not out of luck! The drama program is is bringing Chicago the Musical to East High! Auditions are being held November 20th, so get your vocals warmed up and go audition! Put on your best performance, because only 20-25 people are being casted. If acting just isn't your thing, but you want to be involved, productions rely on a skilled stage crew and tech team as well. The drama elective class is also open to everyone if you just want to get your feet wet!