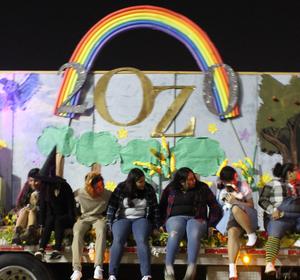 Every year, schools across the country hold a Homecoming event. It's a time when alumni are invited back to their Alma Maters to celebrate the bond they have with their schools. The tradition was alive and well at East High this year and it had all the makings of a magical night: a [victorious] football game was held, floats were built, and lots of people had tons of fun! This year’s floats revolved around the theme of classic movies. Each class had been planning their floats since late September and Homecoming was their time to shine! The freshman float displayed a Teen Beach Movie theme, the setup was split between a beach and bar interior where students were dressed in the movie’s theme. When asked why the idea of Teen Beach Movie was chosen, Juan Tores explained that the idea had been on their minds and when they found out this year's theme for the floats, it clicked and they knew what they wanted. After everything was done, Juan was asked if he would change anything at all and he honestly wouldn't change much because he was satisfied with the finished product. The sophomore float displayed the last scene from the movie Grease, the setup consisted of the carnival scene where the two main characters and their friends broke into singing and dancing. The students were dressed as one of the main characters from the movie of that scene. Israel Villegas, one of the students who was working on the float, talked about how the hardest part of making the float was getting everyone to cooperate and getting the materials. The float idea was brought up by Laila Baameur, who suggested it because it was "a nice happy scene to display,” and everyone agreed and they got to work to bring the idea to life.

The Junior float featured a scene from the movie, The Greatest Showman, where the characters host the circus. The students were dressed as the performers from the movie. Emily Sartin, one of the students who worked on the float, explained that the idea originated wtih Chiara Rickard and they just ran with it from there. Finally comes our winner, the senior float. This float was The Wizard of Oz themed, it had scenes from the Kansas setting to the Emerald City and students were dressed as characters from the classic movie. Jenny Rejon, one of the students working on the float, talked about how the hardest part of the float wasn’t necessarily the building, but actually planning the set and layout especially since there were a lot of parts involved that they wanted to include.

The Betty and Bobby blade competition this year consisted of many candidates who were nominated by teachers and voted by students. At the game all the finalists were shown off and cheered on by the audience during the halftime show. Soon after the nominees were introduced, the winners were revealed to be Shanice Rodriguez and Andrew Perez! The bleachers roared with cheers as everyone celebrated their accomplishment.

This year’s Homecoming event kicked off the EBHS 2020 year with flying colors, our definitive win over Foothill, the amazing floats presented, the rally, and the Betty and Bobby Blade winners certainly raised the bar for fun and excitement!