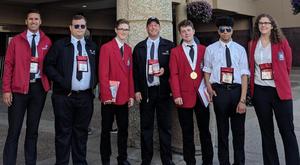 Click here to see the award-winning animation!
Jackson was part of the Regional Occupational Center (ROC) program in the "3D Animation and Visualization" course. In the class, he used a software program known as “Autodesk Maya” to animate/model. His passion for animating led him to compete in SkillsUSA which is a competition where students from middle school through college show their skill in a specific trade, which can be anything from culinary arts and computer programming, to web design and animation. The competition takes place over the course of a year, where it begins at a few regional contests in each state. The top three from each regional competition move on to the state level, and the first place winner at the state level goes against the best of the best at the national competition in Louisville, Kentucky. That's where Jackson has ended up...two years in a row. “Competing in a major competition is ultimately an amazing experience and I feel that I learned a lot from it” explained Jackson when asked about his experience. “There was a certain amount of worry involved, from not knowing if the other competitors were better than me, to waiting at the ceremony to see if you are named as the winner, but it is still a very fun and rewarding experience.”

As a graduate, Jackson has returned to Kern High and is a Teacher’s Aide in the same ROC 3D Animation and Visualization course he completed. He loves animation and plans to expand his skills and build his knowledge with additional training and college courses in the near future. Congratulations Jackson!